Japanese Sake tasting involves the following sequence of steps. The procedure is basically the same as for wine tasting.

(1) Observe the appearance, including color and clarity.

(2) Evaluate the uwadachika (orthonasal aroma) by bringing the vessel up to the nose and smelling the aroma given off directly by the sake.

(3) Take about 5 ml of Sake into the mouth, spread it around on the tongue, breathe in air through the mouth and mix it with the sake.

(4) Evaluate the fukumika (retronasal aroma), which is the aroma that reaches the nose via the mouth.

(5) Slowly evaluate the taste on the tongue.

(6) After expectorating the sake, quietly sip more sake and allow it to pass down the throat in order to evaluate the aftertaste.

Most varieties of sake are clear. Except for nigorizake and so-called unfiltered sake, which are intended to have a cloudy appearance, any turbidity in bottled sake indicates that it has not been properly filtered. Although not to the same extent as wine, sediment may form in bottled sake that has been stored for a long time.

Colorless, transparent sake is filtered using active charcoal to stabilize the quality. This treatment removes impurities and color. Sake that is not treated with active charcoal may retain a pale yellow color. The color of koshu, or sake that has been aged for a long time, ranges from gold to dark amber. This color results from the reaction of the sugars and amino acids in the sake.

Sake also discolors if it is stored at high temperature or exposed to light for a long period. These conditions also increase undesirable aromas and bitterness, reducing the commercial value of the product. Determining whether there has been quality degradation requires examining the full range of color, aroma and taste attributes.

The first tastes noticed after taking sake into the mouth are sweetness and sourness, followed a little later by bitterness and/or umami, which are most readily sensed at the back of the tongue. Also experienced are the texture attributes of astringency and smoothness. The finish (aftertaste) is experienced after swallowing or expectorating the sake.

The balance of sugars and acids determines whether sake tastes sweet or dry. Increasing the acidity will reduce the sake’s sweet taste even if the amount of sugar remains the same.

The sugar level and acidity also affect the sake’s body. Sake with a high sugar and acid content is regarded as rich or heavy. Amino acids and peptides also contribute and high levels of these result in full-bodied sake. A full-bodied variety may be referred to as having koku or goku(mi).

Two Japanese terms used to denote the level of body are tanrei and nojun. Tanrei conveys the notion of “light” as well as “clean” and “sophisticated.” Nojun, on the other hand, conveys the meaning of “full (rich)” along with “complex” and “graceful.”

Umami refers to “savoriness” or “deliciousness.” A key amino acid associated with umami is glutamic acid. Sake is richer in amino acids than wine or beer, and contains a large amount of glutamic acid. Adding glutamic acid to sake, however, does not boost the sensation of umami. This is probably because the umami of sake derives from a harmonious blend of numerous amino acids and peptides.

Bitterness is not a desirable trait in many varieties of sake, but it is one of the characteristics that give long-aged sake its complexity.

An appropriate level of aging reduces any roughness or pungency to produce a smooth, mellow sake.

In high-quality sake, regardless of whether it is sweet or dry, heavy or light, the taste is expected to vanish quickly after it leaves the mouth. This is referred to as kire. Unlike wine, a long finish is not regarded as a desirable characteristic of sake.

Balance or harmony is an important feature of sake. Sake with a well-balanced flavor is considered superior. The brewers of ginjo-shu aim to produce a light body, but it should not be watery. Striking the right balance between aroma and taste is also important. The aroma may be fruity, but if the sake has a monotonous taste or an excessively complex taste, it will not be regarded highly. To use somewhat abstract terminology, the type of sake that scores best on appeal and perceived quality is that delivering “elegance” and “resonance.”

SakePortal hopes this guide gives you a mouth watering overview of Sake. have a look at our brewers and product catalogue to water the mouth further.

With many Thanks to the Japan Sake and Shochu Makers Association 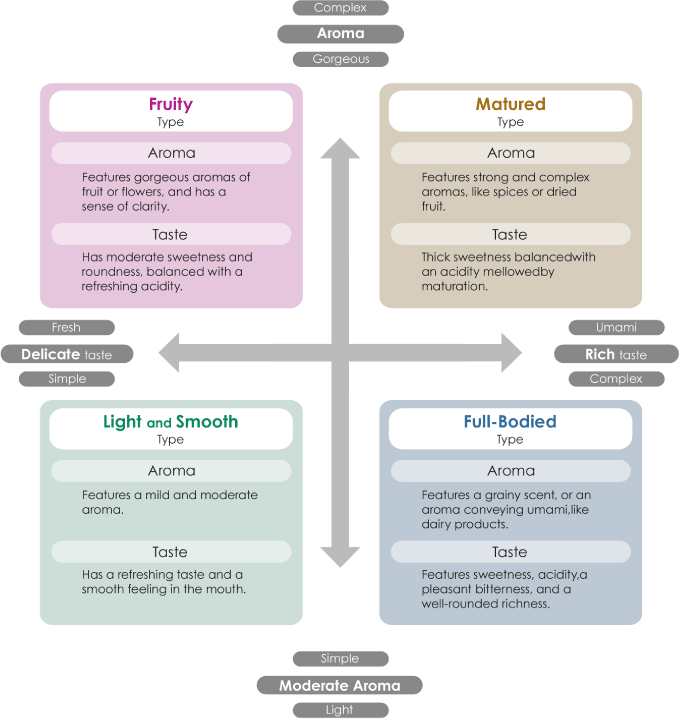