Sake Training: The basics of Japanese Sake compiled by Sakeportal and with thanks to our Sommelier.

To help Educate, Inform and Spread the Sake Love

If we think of the history of Sake as the history of Japanese liquor or of rice-based liquor, the origins go back as far as 2,500 years ago when rice growing became prevalent in Japan.

The oldest written records about Japanese Sake are found in third-century. In the 12th to 15th centuries, Sake came to be brewed at Shinto shrines and Buddhist temples, and the techniques of Sake brewing in use today were largely developed during this period.

With advances in brewing technology and innovations in woodworking technology enabling construction of large 1,500 litre vats, full-fledged production of Sake by specialists (not affiliated with temples or shrines) began in the 16th century (known as the Muromachi period).

The 19th century saw the introduction of the waterwheel so Sake production moved from foot treadles to waterwheel milling. This boosted quality by increasing the level of milling.

At the same time, there was a shift to Sake production in the winter when there is less risk of bacterial contamination; this facilitated a stable production of high quality Sake.

Sake is made from rice, water and Koji.

There are many processes in making Sake but basically it is a 2 stage fermentation.

The rice is steamed and then cooled.

Normal rice can not be used as the protein is too high and affects the flavor. Farmers are contracted to produce Sake rice for breweries. The pinnacle of Sake rice is Yamada Nishiki (although Gohyakumangoku is a close second and has a distinctive flavor).

After cooling the rice, Koji (a fermenting agent) is added to the rice. Often the Koji agent is a propriety ingredient. The mixing and temperature control of the Koji mould with the rice is a very precise process and is done over 2-3 days.

The Koji changes the starch in rice to glucose.

The Koji is one main element that also gives Sake health benefits, unusual for alcohol but studies show Sake can be beneficial for a range of health benefits from weight loss, healthy skin, anti-ageing, lower cancer risk and boosting the body’s immunity. A full list of benefits can be found here:

After 2-3 days the Koji rice mix is ready.

It is added to a yeast mix and more water is added to turn the glucose into alcohol. This, again, is a very precise process and varying amounts of Koji rice, water and yeast mix are added carefully over 4 or 5 days.

It is the Koji and water used that gives each brewery their base taste.

Because the base taste is similar for each brewery (although the Sake flavor will be very different), we suggest recommending Sake from the same brewery.

The fermentation process takes place over a period depending on the type of Sake and temperature control.

All the ingredients are then pressed to obtain the liquid Sake. The pressing can be done by machine or natural pressed (shizuku) see later.

The Sake is then filtered (sometimes with charcoal, sometimes not) and heated again to 60/65 degrees Celsius to remove any potentially harmful bacteria.

This is where the Sake is put into mesh bags and the liquid that drops through the bag is collected. This is a very time-consuming, laborious process and the Sake is therefore highly respected.

Sweetness and dryness of Sake is ranked as below:

We suggest you recommend Sake of similar SMV.

How to Taste Japanese Sake

To fully enjoy the Sake we recommend it is served cold 7-8 degrees Celsius.

Do not rush drinking Sake. It is to be savoured and enjoyed!

The recommended steps are as follows:

(1) Observe the appearance, including color, clarity and viscosity.

(2) Evaluate the “uwadachika” (aroma) by smelling the aroma given off directly by the Sake.

(3) Take a sip of Sake into the mouth, spread it around on the tongue, breathe in air through the mouth and mix it with the Sake.

(4) Evaluate the “fukumika” which is the aroma that reaches the nose via the mouth.

(5) Slowly taste in the mouth.

(6) Sip more sake and allow it to pass down the throat in order to evaluate the strength and flavor of the aftertaste.

Pour from the bottle with the label up. This dates back to the receiver being able to see what Sake you are giving.

Sharing is important! Fill someone’s cup up when it is one third empty.

This is a good idea to get customers to follow traditional Japanese sharing Sake culture, as it means customers

Your Sake can be stored for up to one year. Longer is possible and the Sake will not go bad but the taste will change.

It is best stored in the shade in a cool or, preferably, cold area.

After opening, drink within 2 weeks and keep refrigerated.

To help the Sake last longer an air vacuum pump (the same as used for wine) is recommended. 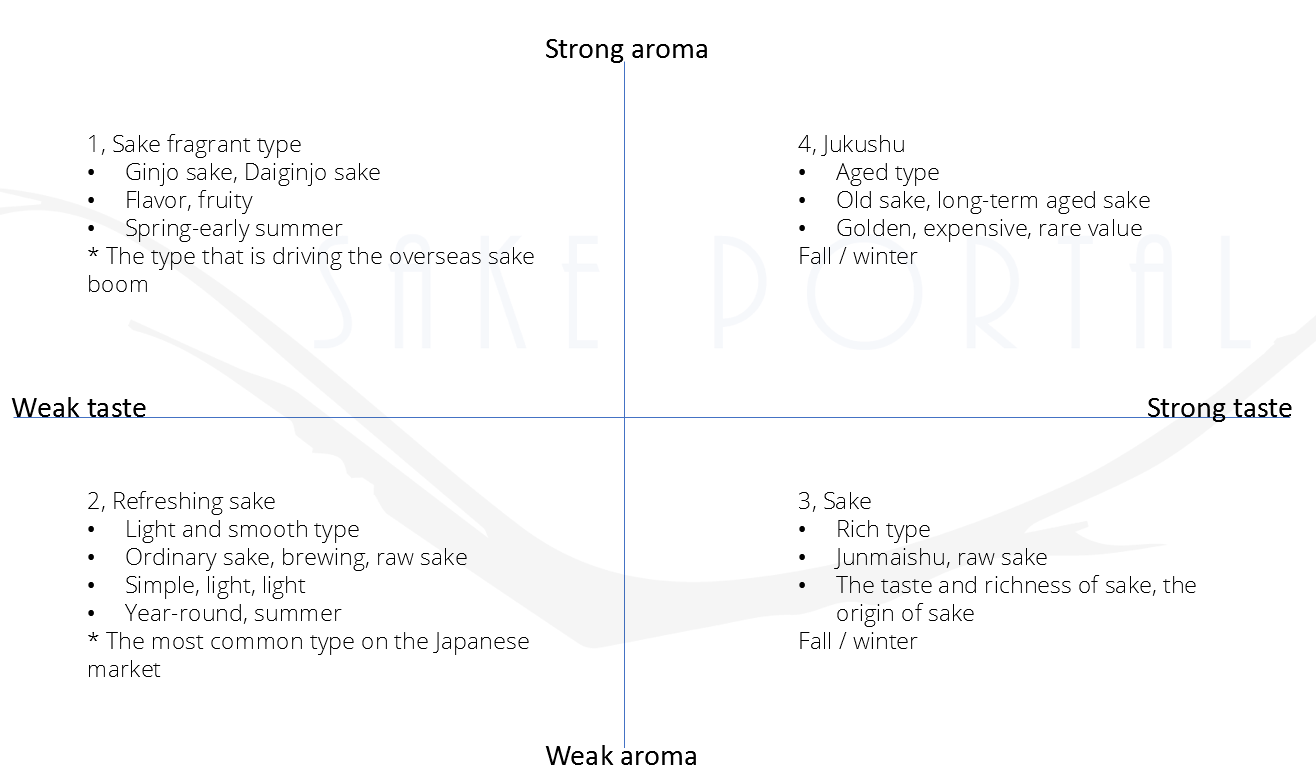