Happier news all round!

This record-high growth for the 12th consecutive year is hopefully linked with the global reopening of many suffering bars and restaurants.

Continuing the trend seen for a while, China provided the highest total value of export, followed by the USA and Hong Kong in 3rd.

The USA provided the highest total volume of export, followed by China and Hong Kong in 3rd.

Of special notice was that France held the highest percentage of growth in both total value and volume in 2021. We hope this French growth will inspire and spread across Europe and the UK in the coming years.

Sake exports reached a record high for the tenth consecutive year on a value basis in 2019, at about 23.4 billion yen, representing 2.48 million 8.64L cases. Although exports only account for  4.6% of the entire sales of Sake, this ratio is expected to grow as domestic sales are still shrinking.

The global market is anticipated to register a CAGR between 4.7%- 12.5% (depending on the forecast company). The North American market remains the largest importer of Sake followed by Europe and Asia Pacific. Within Europe, France is the stand out with imports of Japanese Sake currently at record levels: sales reached $2.6 million in 2019- more than four times the figure 10 years previously.

However the type of Sake is imported is not similar. Within the more Sake sophisticated Asia Pacific market there is a relatively bigger demand for higher priced Sake and smaller brewery Sake compared to the North American market.

The Sake market is still globally dominated by the well-known mass-manufactured brands but as consumers are becoming globally more Sake sophisticated they are expected to follow the Asia Pacific market and seek out smaller artisan brands: in trend with overall alcohol beverage market.  Similarly, at present, around 70%–80% of the Sake produced is non-premium or low priced Futsushu; growth is expected to occur relatively more in the premium range (Ginjo and Daiginjo): again, in line with the overall alcohol beverage market.

The full impact has not been reflected yet but the total Sake shipments January to March 2020 was down about 18.4% on the previous year. Global impact on importers has (of course) been massive with some importers in the USA losing 80% of their sales (JETRO). The full impact and data will be available middle of 2021.

With Japanese Sake makers making new innovative flavors, the upcoming Olympics (maybe) and  the 156,000 restaurants serving Japanese food outside Japan in 2019, (compared to just 24,000 in 2006), when normal business resumes it is hoped there will be a renewed drive and interest in Sake.

Sakeportal foresees one of the biggest growth opportunities in the Sake RTD market.

Sake, also called nihonshu, is rapidly going global and the number of Sake drinkers is rising sharply around the world. The  Global Sake export market is showing great growth: the value of Japan’s annual Sake exports doubled over the past five years to a record-high 22.2 billion yen ($200 million) in 2018. The USA is the top Japan Sake export market with total imports worth $45 million in 2016, and the figures show growth potential, with Japan’s tax agency data indicating a 21% rise in global Sake exports year on year. Following America for Sake imports are the Asian countries of Hong Kong, China, Korea, Taiwan, Singapore and the European countries headed by the UK and France. Recent Trade Agreements with the EU and the CPTTP Agreement covering most of Asia and Canada will also have an added positive impact on sales of imported Sake. 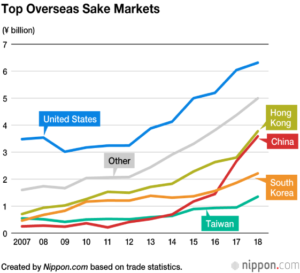 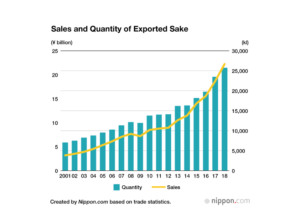