Sparkling sake, once viewed as a sweet, low-alcohol, low-quality brew, is experiencing a small yet significant renaissance.

Thanks to recent efforts by organizations like the Japan Awasake Association, which is introducing and encouraging methods and certifications similar to that of Champagne, as well as international retailers championing the sparkling trend, Japanese sake brewers are working to create a more premium version of the bubbly brew.

It’s occurring in tandem with sake’s increasing popularity in the U.S., and producers and retailers are encouraging demand by bringing a new range of styles to market.

Sake has existed for centuries, but its relatively recent popularity in the States is due to supporters like Sakagura, a restaurant in Midtown Manhattan that  specializes in Japanese small plates and sake. Since it opened in 1996, Sakagura has been a pioneer in introducing sake to New Yorkers. Its beverage menu includes five sparkling sakes, including Okunomatsu Junmai Premium Sparkling, a sake brewed for Formula Nippon race car drivers so they could spray sparkling sake instead of Champagne at the finish line.

Since opening in June 2019, NYC newcomer Tsukimi, a trendy East Village restaurant that offers a modern take on kaiseki, a traditional Japanese multi-course meal, has offered two sparkling sakes on its menu. Servers also pour Champagne for guests after sparkling sake so they can compare the two sparkling drinks.

The Champagne comparison may seem intuitive, but the introduction of the méthode champenoise among sake producers is actually a fairly recent development, thanks in part to the Japan Awasake Association, formed in 2016. Taking its name from “awa,” a Japanese word that means “bubbles,” the association’s main goal was to distinguish its products from other sparkling sakes on the market by creating a strict “Champagne-style” certification.

(In the past, sparkling sakes have been known to be bottom-shelf, overly sweet sparklers, often marketed toward women.)

Nihonshu, meaning “Japanese liquor,” or sake as it is referred to in English, is an alcohol made from fermented rice that has been a staple of Japanese culture for centuries. Traditionally found in izakayas (Japanese bars), the beverage offers a range of flavors, making it an attractive accompaniment to food.

Another approach, known as the “tank method,” involves trapping naturally occurring carbon dioxide so that it dissolves into the sake. This process results in sake that is sweeter and more lightly effervescent than full-on fizzy.

The third option is identical to the traditional method of making Champagne (méthode champenoise), involving adding a small amount of lees (yeast cells) to the sake before bottling to induce a second fermentation. This approach is driving quality sparkling sake forward.

Timothy Sullivan, a “Sake Samurai” and the founder of online resource UrbanSake, says these premium sakes are typically made in a brut style with “no sugar added, very low acidity, and, in general, have a higher amino acid, or umami profile than you would get in a sparkling wine.” This technique delivers super-fine bubbles and a more complex product overall. “That opens [sparkling sake] up to pairing with anything on the raw bar, crab legs, or oyster on the half shell,” Sullivan, who also represents Hakkaisan Brewery of Japan’s Niigata prefecture, says.

Hakkaisan is a founding member of the Japan Awasake Association. “I think the ‘Awa’ Association is necessary to alert customers that this is something different. This is a new approach, a new production method, and something that is on a whole different level as far as quality is concerned,” Sullivan says.

Regarding the recent push to make sparkling sake via the traditional method, Mikey Gower, sake sommelier and head bartender at NYC-based SakaMai and Tsukimi, writes in an email, “I think this is how the best examples will be made in the future, and once more aging is introduced to production, the results will be magic.”

Sparkling sake may be the perfect vehicle to bring new and exciting tastes to the burgeoning U.S. sake market. “Something that is so characteristic of sparkling wines today is snappy dryness and high acidity, two things that are not naturally inherent in sake. However, modern styles and brewing methods are beginning to blur these lines more and more,” Gower adds.

“If a guest is prepared to drink something that is going to be new and different than their favorite sparkling wine, the reactions are more than likely to be positive.” 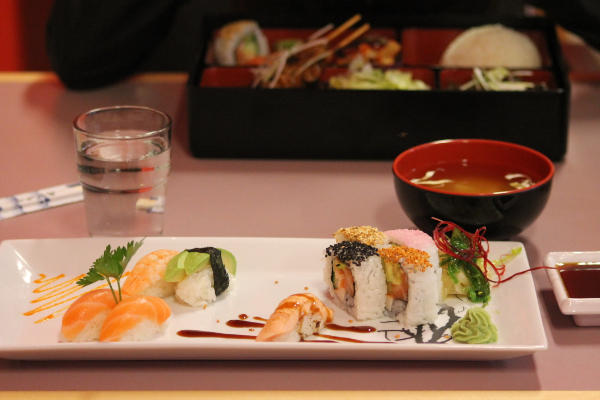