EY Japan, a branch of the global accountancy firm, plans to launch a blockchain traceability system for Japanese sake and fruit, sharing information including origin and delivery records with foreign consumers, in a move that will help brewers and producers differentiate their authentic products from counterfeits.

“SAKE Blockchain”, which has been developed by the Japanese arm of the consultancy group, will be rolled out in Asia in places such as Hong Kong and Singapore once a stable business environment has been reestablished in the wake of the spread of the new coronavirus, which has affected the consumption of Japanese products.

The data to be shared on sake — an alcoholic beverage made from fermented rice — will include its ingredients, information on where it was brewed, as well as details of quality control along the distribution chain, including temperature records.

In addition, the end consumer will be able to check the brewer’s history and will even receive recommendations of food to pair with the products by scanning a QR code on the bottle using a smartphone.

The service will be available in English, Chinese and Korean languages.

Sake producers will benefit from being able to track every bottle from the point of delivery to the final consumer, which will help improve their marketing strategies for the products outside Japan.

Most sake makers are small to mid-sized companies that do not usually have the capacity to conduct market research on overseas markets and cannot identify retailers and end consumers once their product has passed on to trading houses.

Japan’s exports of sake are on the rise thanks to a growing appetite for the country’s cuisine around the world.

The value of the nation’s sake exports rose 5.3 percent in 2019 to 23.4 billion yen ($223 million) according to trading data from the Ministry of Finance.

However, counterfeit sake products are commonly distributed across Asia, often being sold at the same or even a higher price than authentic, Japanese-made brands.

“Being able to tell the story of the production and origin [of sake] will help to differentiate it from fake products,” Hideaki Kajiura, a partner at EY Advisory & Consulting told the Nikkei Asian Review.

Japan’s largest sake exporter, HAKUTSURU SAKE Brewing, told Nikkei “counterfeit products are available for both high-end and cheap regular sake. If you look closely at the design on the bottles, they are elaborately made.” 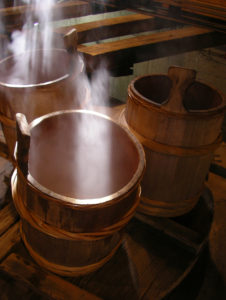 The company cites cases in which fake sake has been found in Europe and China. “We cannot discover fake products without customers [making] inquiries. We recognize only a few cases a year, but [there are] many more. Most of the time, there is no way to take countermeasures,” the brewer added.

EY’s Kajiura pointed out another issue for the industry, whereby sake is improperly distributed overseas, referring to the optimum conditions in which to store the drink.

“The best temperature to keep sake in good condition is said to be 5 degrees. But when sake is distributed in foreign countries, most carriers, restaurants and retailers do not know how to handle the product, such as managing its temperature, due to a lack of information.”

In addition to this, few customers or restaurants understand what kinds of food go best with sake.

In order for blockchain to be more widely adopted in this area, the cost of the system needs to be made accessible for small brewers and businesses.

Kajiura believes that use of the platform will increase the consumption of sake outside Japan, as well as increasing brewery tourism, citing the example of some wineries that received more visitors after adopting a blockchain system developed by the consulting company in 2016.

It is still rare for consulting companies to be involved with blockchain solutions for the drinks industry. Information Services International-Dentsu, a consulting arm of the Dentsu advertising group, has been experimenting with blockchain adoption for the wine industry in Japan’s Miyazaki prefecture, but it has not yet been commercialized.

EY Japan hopes to expand the system beyond sake to the country’s fruit industries, which have also been affected by counterfeiting.

According to the Ministry of Agriculture, Japan branded strawberries, grapes and melon seeds are commonly found in countries such as South Korea and Thailand.